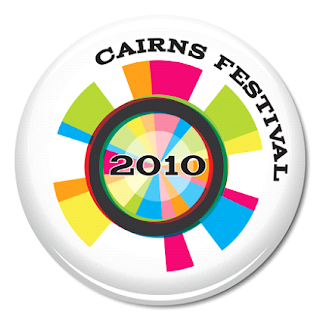 Cairns, 11 August, 2010, An eclectic bunch of creative people touched down in the Tropical North last week as participants of Cairns Festival’s first ever Artist Residency.

According to Cairns Festival producer, Eric Holowacz, the initiative, sponsored by Cairns Regional Council and its Tanks Arts Centre, is a pioneering effort to bring significant cultural producers to the Tropical North and offer them a platform to develop new projects. While being hosted in Cairns, visiting artists will collaborate with local people and organisations, be given a chance to depart from their usual surroundings, and draw inspiration from the region.

Having arriving last week, Cairns is now a creative home to New Zealand and Amsterdam based carnival and stilt-walking troupe, Empress Stiltdance. Artistic Director, Emily Buttle and her all female crew of eight are enjoying their residency that in coming weeks, will culminate in a free public performance of new aerial work, Kahuku: A Butterfly Romance featuring two aerial artists and three stilt-walking performers. From their site on the northern Esplanade, the public are invited to watch the open rehearsals and witness the work in progress and attend a free preview of the finished piece on 26 and 27 August.

"We consider this an innovative model for Festivals, using hospitality and the residency as a commissioning force," said Mr Holowacz. "The goal with each visiting artist or group is to connect creative people connect with our community, and generate new works that might make their way back to Cairns, or even find a larger audiences around the world."

"Following this experimental first season of residencies, we will be inviting and hosting artists throughout the year," Mr Holowacz says.

Artist residency programs exist around the world, with notable examples in Australia being Gertrude Contemporary Art Space and Montsalvat in Melbourne, IAKSA in Perth, Salamanca Arts Centre in Hobart, Casula Powerhouse, and Bundanon.

As in Cairns, most residency programs provide living accommodation and a work space. They also offer valuable respite, a change of scenery, and fresh inspiration. Very few are operated by local government, and even fewer are linked to festival programming and new cultural production.

Mayor of Cairns Regional Council Val Schier was excited about the prospect of welcoming talented creative figures from other states and countries.

"Cairns has the right ingredients, great venues, a sense of independence and fearlessness, and an extraordinary local creative community to support visiting people and their ideas," Cr Schier says.

“The Cairns Festival Artist Residency will also provide important new Queensland influences for choreographers, sculptors, film-makers, and others involved in cultural production around the world.”

More about the Artists-in-Residence

Founded in 1996 under the direction of Emily Buttle, Empress Stiltdance now boasts worldwide troupes giving hundreds of performances each year. Appearing from Istanbul to Hong Kong to Melbourne, the company is known for its innovative costuming, magical choreography, and simple storytelling. Buttle’s experimentation with outdoor aerials led her to Cairns Festival with a vision of developing a new work in the Far North.

Renowned Australian percussionist and composer, Michael Askill, will also do a stint as Festival artist-in-residence. Askill is a noted player of mallet instruments, like vibes and marimba, as well as hand percussion from around the world. His creativity has inspired dozens of composers to write works especially for him. In his solo career and in his longstanding percussion quartet, Askill seeks to create music that crosses cultural boundaries. While in residence in Cairns, Askill will begin developing a new collaborative project, Aqua Sonic, for possible inclusion in the 2011 Cairns Festival.

The final group of artists-in-residence for 2010 Cairns Festival is American playwright Dean Poynor and his emerging New York-based troupe, The Salvage Company. They will spend two weeks in Cairns developing and presenting a new stage work, Homo apocalyptus. Based on a grim post-apocalyptic future where zombie life forms run rampant, Poynor and company will collaborate with local theatre practitioners to bring this play to life at popular Cairns nightclub, The Attic.
at 2:52 PM